Just A Lick Of Love

We were overjoyed to learn the gender of our little baby earlier this week.  But more importantly we are so grateful to know that Baby Clough is perfectly healthy and growing right on track!! To use my high risk doctor’s own words, “Your baby is perfect from head to toe!” Does not get any better than that! Without further ado, we would like to introduce to you the newest member of our family…. 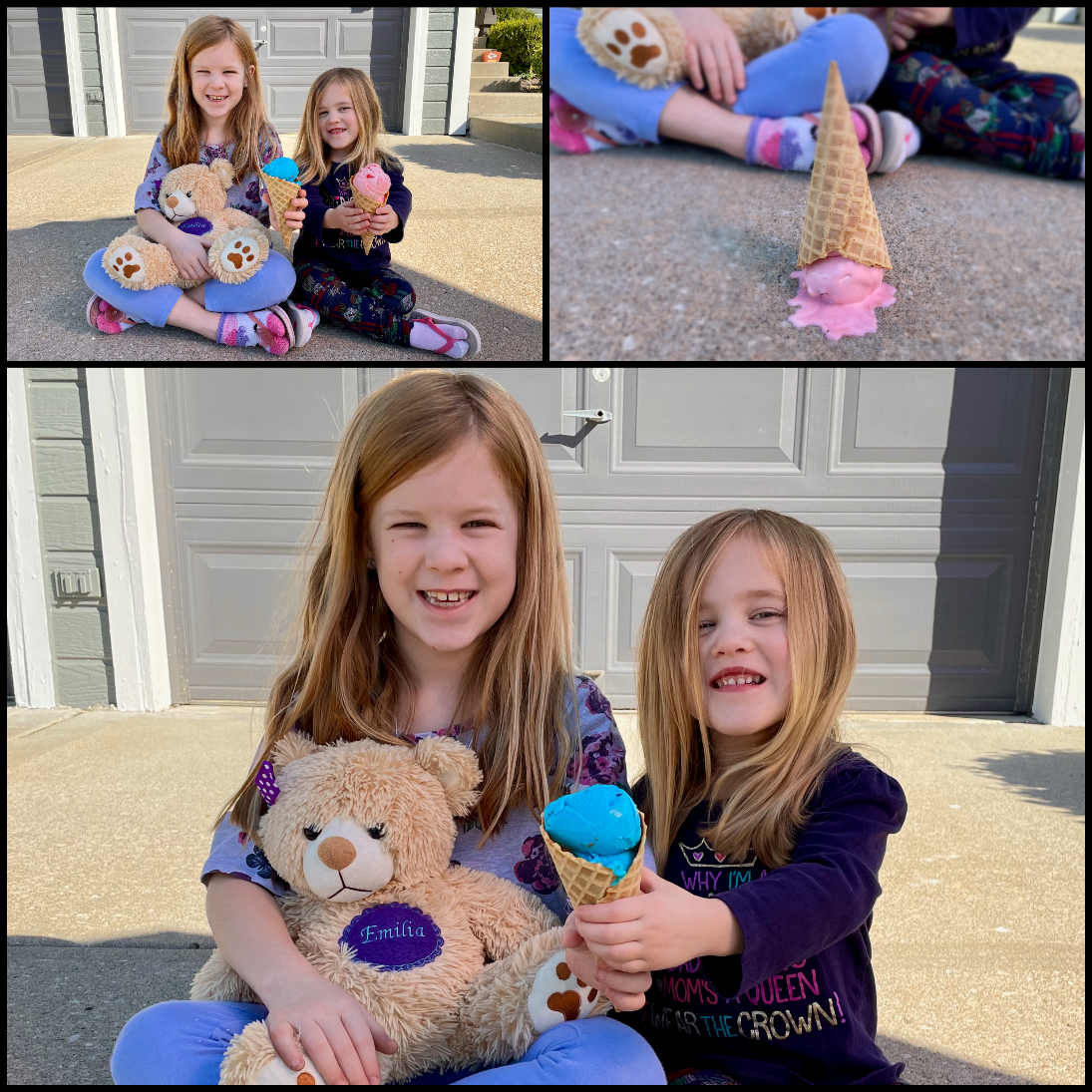 After having three beautiful daughters and eight wonderful years filled with everything pink, princesses, tutus, and fun tea parties – the idea of having a boy felt like such a foreign concept.  We are still in complete shock, but so So SOO excited to welcome a baby boy to our family!! From the very start of this pregnancy – Dan, Adelaide, Roselyn, and I all predicted that Baby Clough would be a girl.  It wasn’t until my anatomy scan on Tuesday that I began doubting my original guess and started to think Baby Clough might actually be a boy.

My Ultrasound Tech was great! She talked to me throughout the entire scan.  Sharing specifics about the baby… what body parts she was measuring, pointing out the placenta, telling me the guestimated weight of Baby Clough (9 oz, in case you were curious 😉).  A lot of the ultrasound was just making small talk.  She wanted to know the gender and ages of my other children.  Her oldest and youngest children were the same age as mine.  The only difference was she had boys instead of girls.  This eventually segued into her talking about circumcisions and she spent a good chunk of time on the subject.  In the middle of the conversation I stopped and asked myself, why are we focusing so much on circumcisions?! 😂 I started to wonder if she had already spotted Baby Clough’s privates and knew we were having a boy.  Maybe talking about circumcisions was her subconsciously sharing boy mom advice or maybe it was all in my head? Over the span of five pregnancies, I have had quite a lot of ultrasounds.  For an amateur, I’ve grown pretty good at recognizing and identifying body parts on an ultrasound.  There was never a point where the technician had me turn away or cover my eyes when she was figuring out the gender, but she also didn’t tell me when she was looking at our baby’s privates either.  At one point, I noticed she was looking at one of Baby Clough’s legs and right next to it I thought I might have seen what could have been boy privates.  Who knows, it could have been my baby’s other leg… they do have two! 😂 Between the conversation and maybe seeing things on the ultrasound, I left my appointment thinking Baby Clough might actually be a boy!

Unfortunately, Dan was unable to join me for the anatomy scan.  With the pandemic and our family trying our best to socially distance – rather than get a baby sister, we decided to have Dan stay home and watch our girls.  Not having Dan present and also knowing that Baby Clough would be our last baby, we decided we wanted to learn the gender in a fun way.  We decided to not find out the gender at the appointment, but rather have cupcakes made with the gender hidden within the actually cupcake! I had the Ultrasound Tech write Baby Clough’s gender down and place it in an envelope.  Directly after my appointment I took the envelope to a bakery, handed it over to the baker, and instructed them to fill each cupcake with the appropriate colored frosting… pink for girl of blue for boy.

The next 24 hours was torture! I had the baker give the envelope back, so we could keep it as a souvenir.  Dan and I had to practice some serious self restraint in order to not open the envelope to find out the gender! We made a big fancy production out of the event.  After picking up the cupcakes, I grabbed curbside dinner.  We scarfed down our food that night in order to quickly move onto dessert to find out the gender.  I have a Cricut machine, so I made cute little cupcake toppers.  Each topper was a silver stork holding a wrapped bundle.  Each bundle had a heart cutout with either sparkly pink or sparkly blue shining through.  Each of us chose which colored stork we thought the baby would be.  Dan, Adelaide, and Roselyn all chose pink.  My original plan was to choose pink as well, but ever since the anatomy scan I felt really conflicted about the gender.  I decided last minute to change my vote from girl to boy and I grabbed a blue stork to place ontop my cupcake instead.

What next?! We bit into our cupcakes! Adelaide beat us all to the middle of the cupcake! She was so excited to learn whether she was getting a little sister or a little brother! When she saw the frosting filling inside she screamed out “I see BLUE!” And sure enough! When I looked down at my own cupcake it was definitely blue frosting on the inside!! Such an exciting way to find out that the last Baby Clough in our family is a BOY!!! We are thrilled to have a son and the girls are so excited to have a little brother! Dan and I are entering new territory here! To all the families with a little boy, share with us your boy advice, because after three little girls we are going to have a lot to learn! We are so excited for this next chapter and we cannot wait to welcome another baby into the world!! 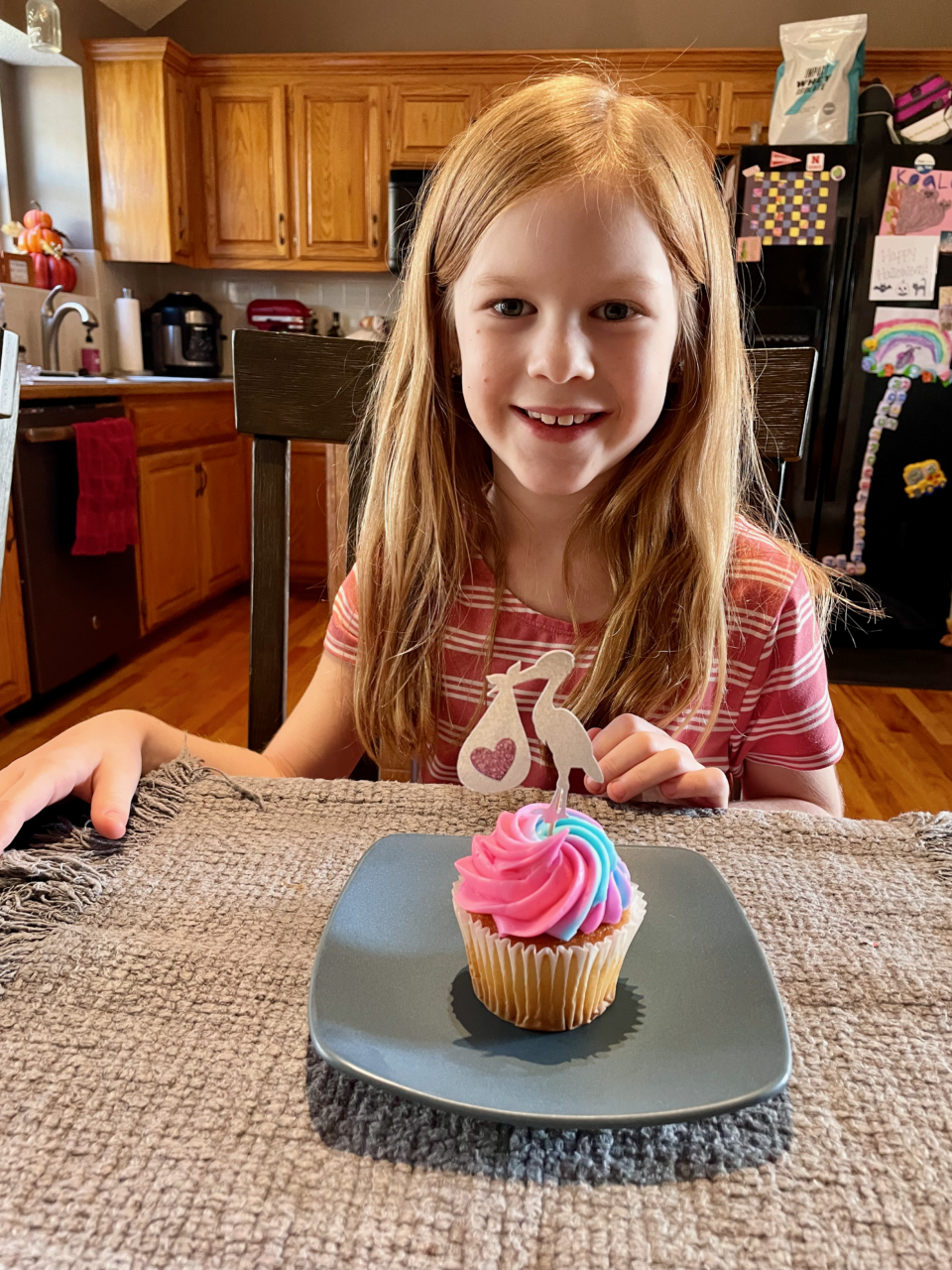 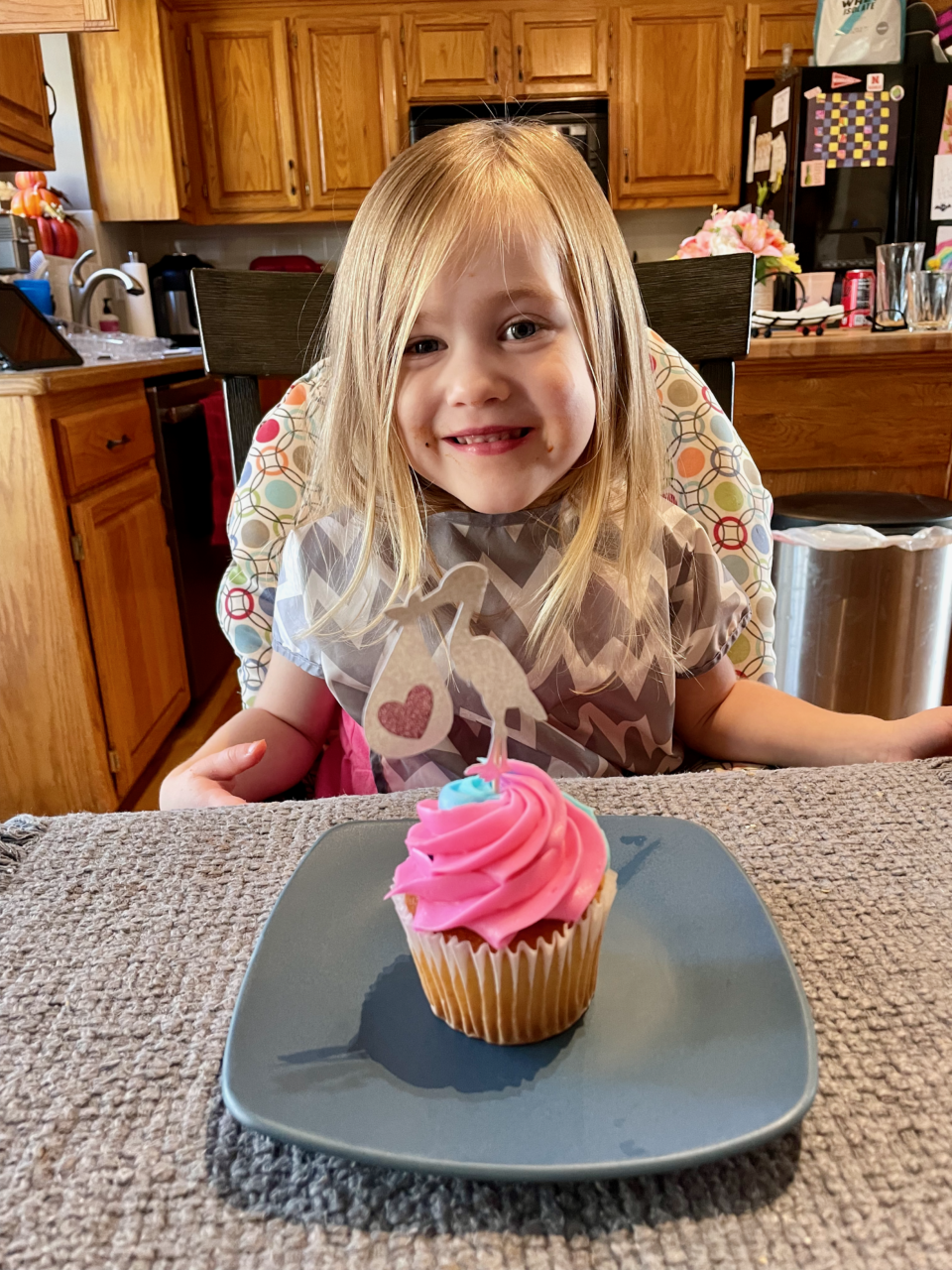 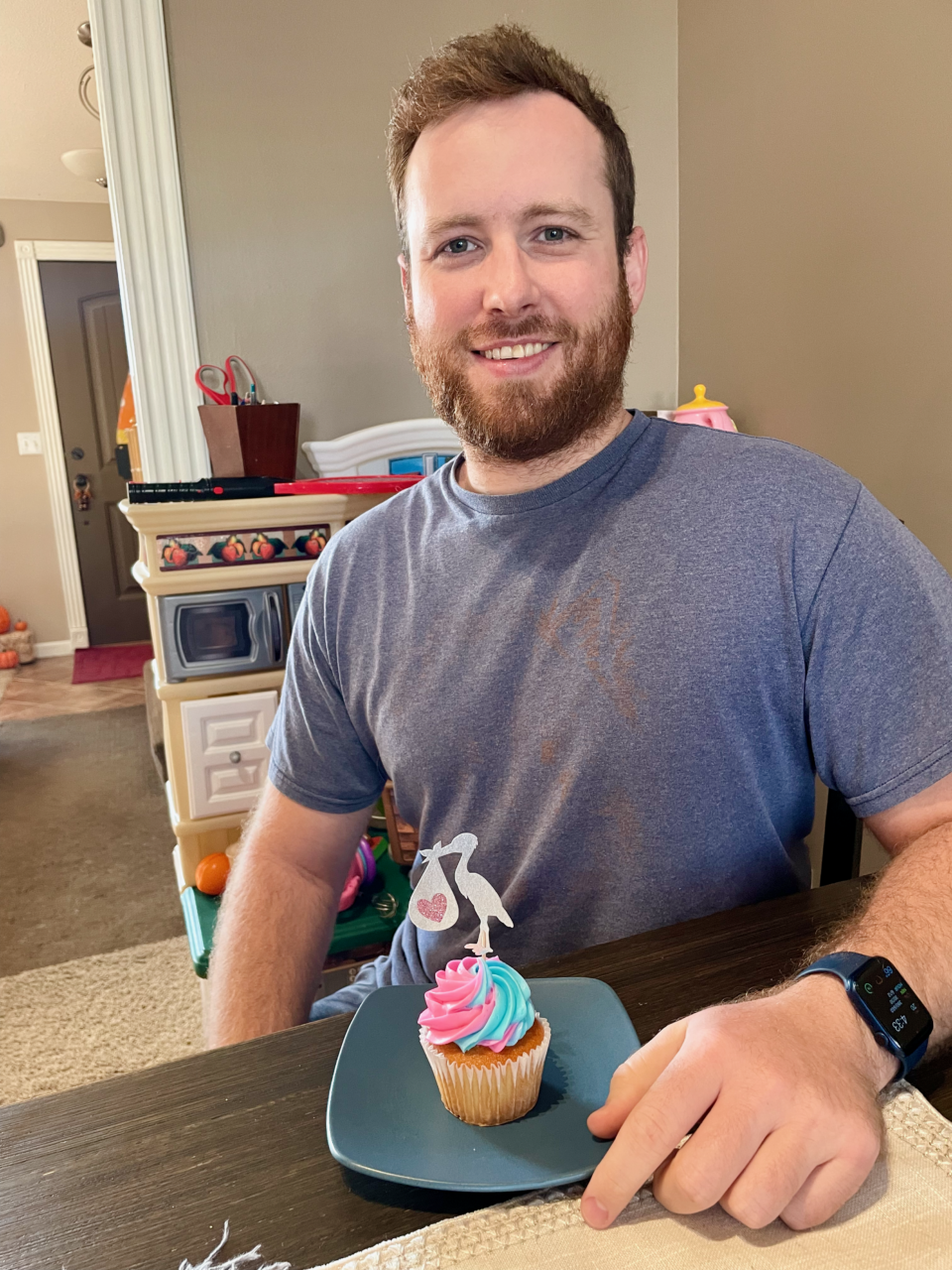 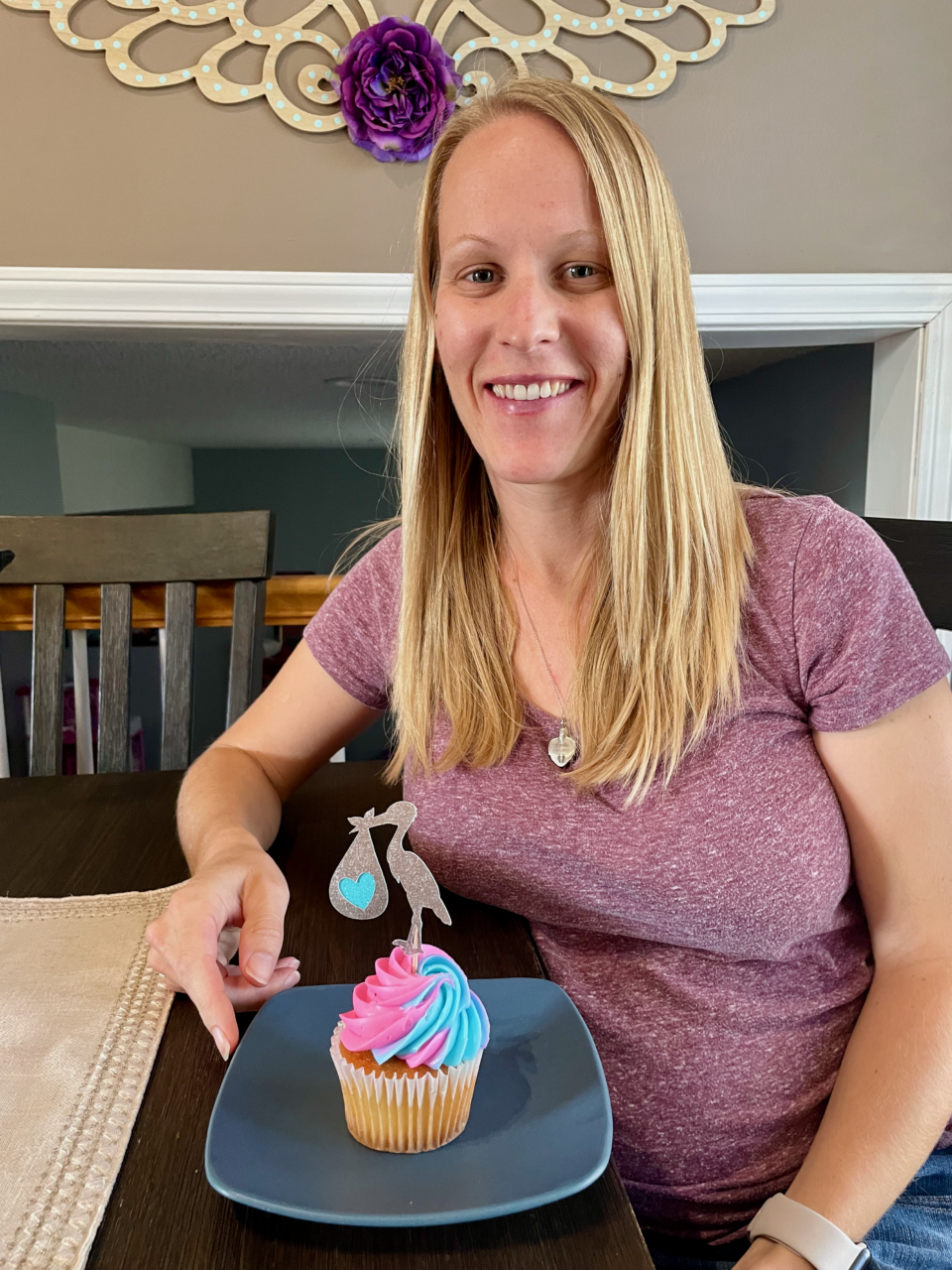 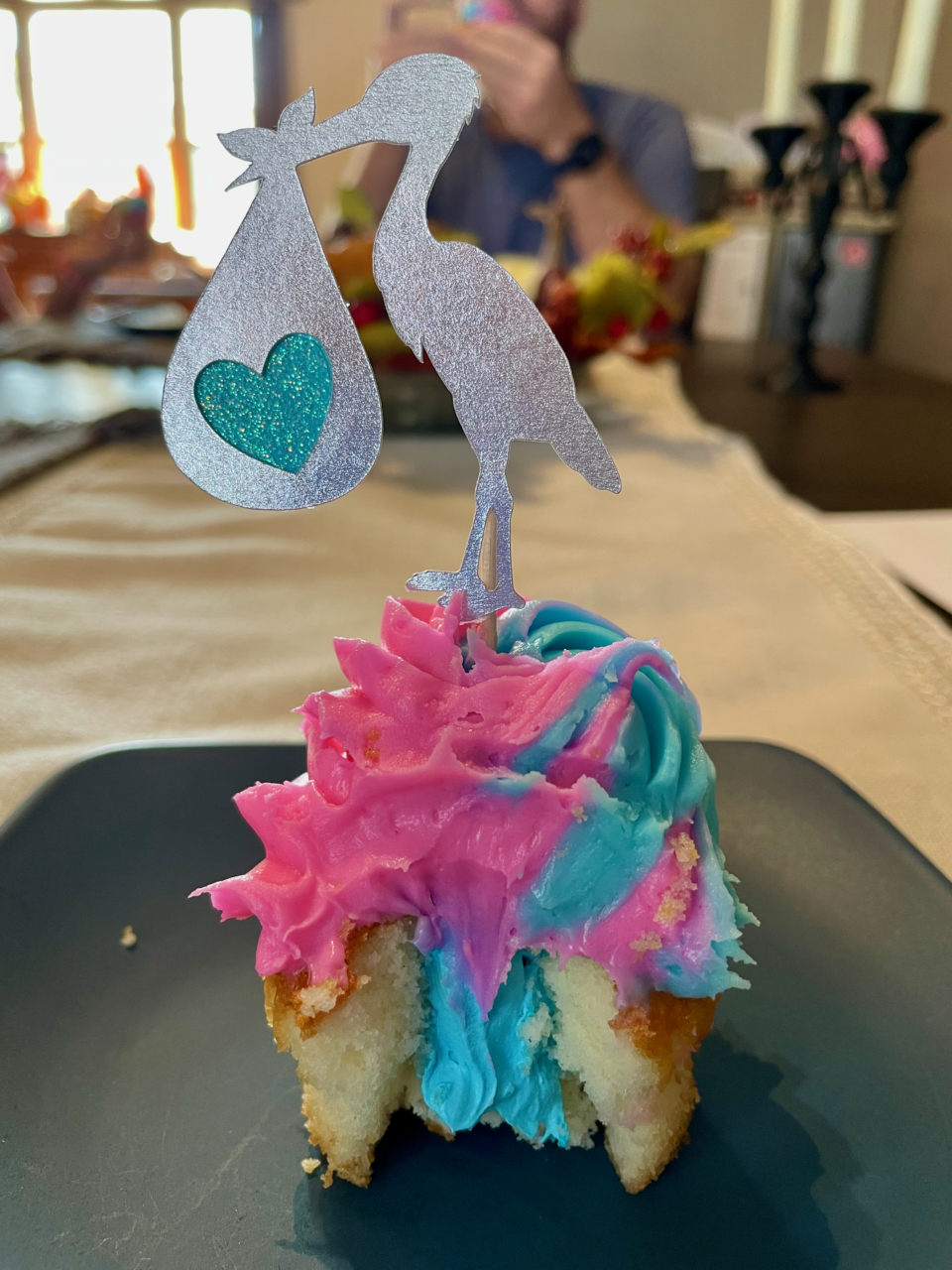