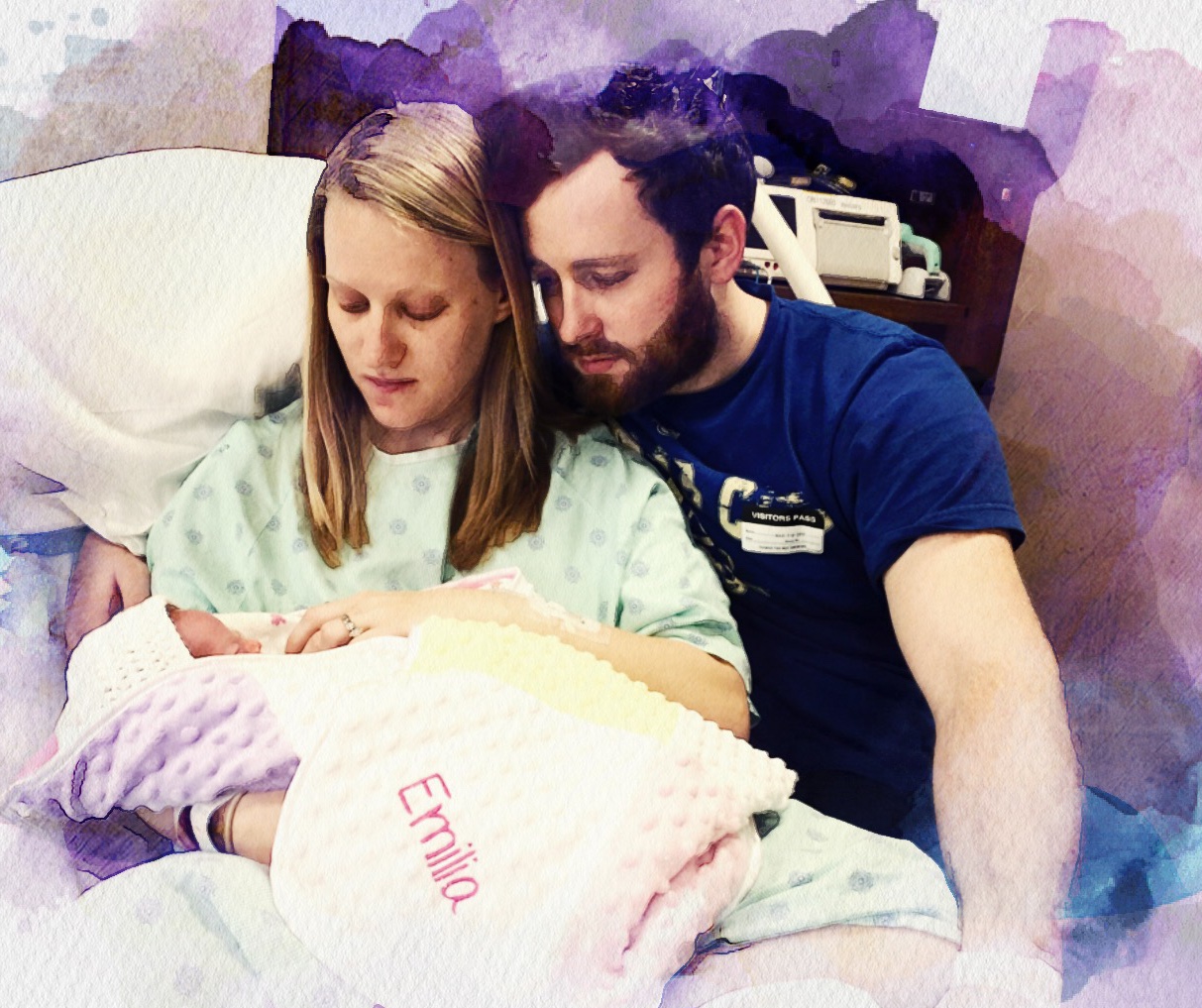 Emilia with her mommy and daddy. “Some people only dream of Angels, we held one in our arms”

In the late summer of 2016, we were overjoyed to learn that our family would be growing by two little feet.  Our three-year-old daughter would soon gain a new sibling and, together, the three of us imagined all the wonderful memories we would soon create as a family of four.  Months would quickly pass and our love for this new little one would only grow as we eagerly waited for April 2017 to arrive.  After each doctor’s appointment, we were always thankful that our pregnancy was right on track and that our little baby girl was extremely healthy.

As the months passed, our pregnancy progressed with no complications or signs that would suggest that our little girl was in distress.  However, on the evening of March 14th, our family frantically decided to go to our hospital to have a fetal non-stress test administered.  It had been over 24 hours since I had last felt Emilia move and we were all beginning to become a little worried.  Once being monitored, it took our nurse quite a while to find a heartbeat, but we were relieved when we finally heard a steady rhythm.  My heart rate at this point was understandably through the roof and could have easily been misinterpreted as a slow fetal heartbeat.  Our nurse wasn’t positive, but she believed the heartbeat we were picking up was not Emilia’s, but mine.  She removed the monitor and switched to a Doppler, which also produced no results.  Our obstetrician then arrived and confirmed with an ultrasound that Emilia had no heartbeat and had died.

We were offered an autopsy but were told the odds of finding answers were slim.  Despite placental pathology and other available tests, most stillbirths are given no official cause of death.  We declined the autopsy but agreed to provide blood samples, the placenta, and the umbilical cord for testing.  Though the results would later come back negative for any abnormalities, our delivery nurses in the OR noticed an infarct on her umbilical cord.  They determined that Emilia’s umbilical cord had likely kinked at some point, blocking the blood flow and cutting off her oxygen supply.  Almost a year after her birth, we were told that the pathology report showed signs of Funisitis.  Funisitis is inflammation of the connective tissue of the umbilical cord.  It is likely that the Funisitis may have caused the compression on Emilia’s umbilical cord.  Unfortunately, the cause of the Funisitis will likely remain unknown.

Emilia Madeleine Rose Clough was born asleep on March 15, 2017, at 7:51 am to Daniel and Charmel Clough (and Big Sister, Adelaide) at North Kansas City Hospital in Kansas City, Missouri.  She weighed 4 pounds, 3 ounces and measured 18 1/2 inches long.  She was born at 33 weeks gestation and was delivered by Dr. Raschelle Schowengerdt.  Emilia was nothing short of beautiful.  She had a full head of red hair and long feet and fingers.  We were amazed at how tall she was, considering she was born six weeks early.  She was and is absolutely perfect.  We can’t even begin to describe how incredible it was to hold and kiss her.  It is a gift that nothing will ever surpass.  Emilia’s time on earth was short, but her little life has spoken volumes.  She continues to brighten our world with sweet little reminders of her beautiful existence.  We are filled with an unbelievable amount of pain, but also an abundance of joy to have held her in person and to now hold her in our hearts.  Emilia Madeleine Rose, our hearts broke saying hello and goodbye to you all in one day, but we would relive this pain a thousand times over just to have you as our daughter.  We love you and will miss you forever!

“How quietly you tiptoed into our world, almost silently, only for a moment you stayed…

but what an imprint your footprints have left upon our hearts.”